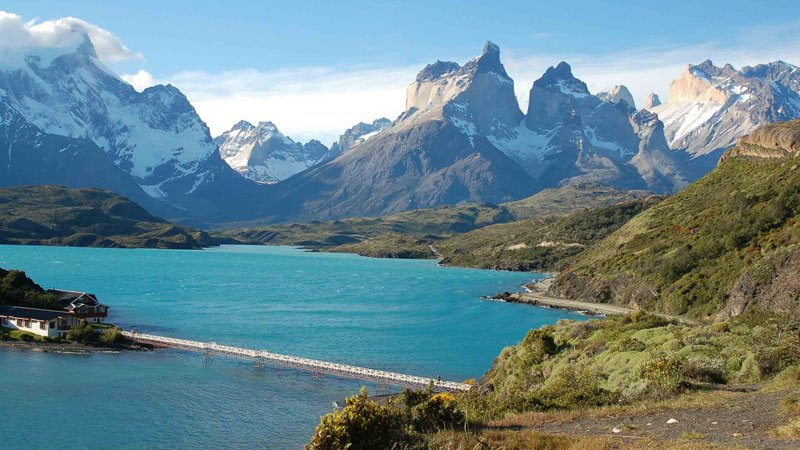 As a tourist destination, Chile is quickly being discovered as one of the most beautiful, interesting and sophisticated countries in South America. Discover Chile, a fascinating country, while studying Spanish.

The 2400 miles (4500 km) long country is tucked in between the Pacific Ocean and the Majestic Andes mountains with impressing peaks of nearly 21000 ft above sea level like Mt Aconcagua the highest summit of the Americas.

This country offers a fascinating variety of landscapes and cultures: wide long beaches, the fertile central valley with its highly touted wineries, the fascinating Atacama Desert, the surprising Chilean Altiplano with its incredible variety of wildlife as condors,vicuñas, vizcachas, llamas, foxes and lots of waterbirds including three flamingo species in the north, and the pristine green wilderness in the Chilean part of Patagonia in the south with its snow covered volcanoes, whitewater rivers, waterfalls, lakes, ancient rain forests and fjords.

One can even explore the mysterious Eastern Island and the frozen Antarctic landscape. Under these conditions almost any adventure tourism is practiced: rafting, climbing, horse riding, mountain biking, paragliding, kajaking, trekking, skiing, surfing, scuba diving, and whatever you like…

Since returning to democracy in 1990, Chile has had a stable political system and strong economy, making it a very safe destination.

The friendly Chilean people, a mixture of mediterranean immigrants with the Mapuche Indians of the south and the Aymara Indians of the north are known for their hospitality. All in all a perfect destination for a spanish language study stay.

If you were in TANDEM in the past, we would like to hear your opinion! we are trying to get better everyday! Please help us filling the form and you will be participating in a raffle of 10 free private lessons!

Tandem Santiago - Escuela de idiomas Violeta Parra
Coronavirus has forced us to interrupt our face to face courses but we don´t give up. Tandem Santiago goes online now!

Tandem Santiago - Escuela de idiomas Violeta Parra is feeling excited.
Corona virus has forced us to stop our presential classes but our courses are going on through internet. Don´t hazle - be part of them!